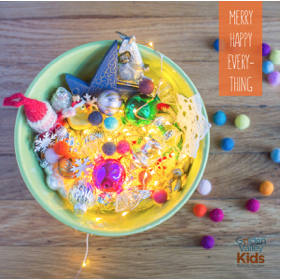 In Italy, gifts are given on the day of the Feast of the Epiphany. A kind witch named La Befana flies around on her broomstick delivering gifts through the chimney and filling stockings. Instead of the milk and cookies we leave for Santa Claus, families leave a plate of broccoli and sausage and a glass of wine for La Befana.

Many Asian countries celebrate Lunar New Year by exchanging red envelopes, or silk pouches with money. The exchange is said to bring luck to the giver and recipient for the new year. Another tradition is to clean your house before the Lunar New Year to sweep away bad luck. Families then wait a few days before sweeping after the celebration so that they don’t sweep away the good luck from the paper wrappings, firecrackers, and wrappers on the floor.

Hindu families celebrate the Diwali Festival of Light in November. The triumph of light over darkness is celebrated with feasts, community performances, and exchanging of gifts. The celebration honors Lakshmi, the goddess of wealth and prosperity, and gifts given during the five day festival are symbols of luck and future good fortune. The Diwali Festival also brings together politicians and community leaders and has become symbolic of inclusion and peace.

In Austria, Santa has an evil counterpart named Krampus. He is said to roam the streets to frighten children. He rattles chains and bells and whisks away naughty children. YIKES!

In Columbia December 6th is celebrated as the, ‘Day of the Little Candles.’ To honor the Virgin Mary and the Immaculate Conception, candles are placed in paper lanterns in windows and front yards.

In Caracas, Venezuela, church goers wear roller skates to Christmas Eve service! The streets are closed so that the skaters can take over the roads on their way to mass. Do you think the Golden Valley police department would be okay with us closing the streets on the 24th this year?

In Iceland, 13 mischievous characters called the Ice Lads come out to play. In the 13 days leading up to Christmas, they leave treats in the shoes of good children, and rotten potatoes in the shoes of bad children!

In Japan it has become a tradition to have a feast from Kentucky Fried Chicken on Christmas Eve.

In Wales, from Christmas to mid-January, groups of people go out caroling with one person dressed as a dead horse.

To welcome good luck in the new year, Ukrainian families decorate their Christmas trees with spider webs. There is a story of a poor family who had no money to buy decorations. When they woke on Christmas morning, they found that spiders had spun beautiful webs to decorate the tree.

In Israel (and many households around the world), the Hanukkah holiday is celebrated over 8 nights with menorahs lit in every window. The dreidel game is played, and potato latkes and jelly donuts are consumed to honor the miracle of the oil burning for 8 nights in the temple in Jerusalem. Hanukkah, or the festival of lights, celebrates miracles both big and small.

What are your family traditions? What do you love about the holidays in Minnesota?